I saw this tag on Fernanda’s blog The Wonderlust reader and decided to join in because I love books and I love Hocus Pocus, so it’s a match made in heaven really.

THE SANDERSON SISTERS: A great trilogy

WINIFRED SANDERSON: A book with a truly evil female villain

Umbridge in Harry Potter and the Order of the Phoenix

MARY SANDERSON: A book that is just plain silly

MAX: A book that is trying really hard to be cool, but doesn’t always succeed

All the Bright Places By Jennifer Niven (My hatred of this book knows no bounds!)

DANI: A book that isn’t afraid to tell it like it is

All the Rage by Courtney Summers

The Mortal Instruments series (Not that I’m complaining)

ICE: A book with a character that’s dumb as a rock

I’m gonna have to go with Twilight, I mean really Bella?!?!

THE BLACK FLAME CANDLE: A book or series you wish you could resurrect

Hmmm this is a tricky one, maybe the Thunder Road series? I really want to hear more about all the characters!

HEADLESS BILLY BUTCHERSON: A book that’s not so bad as people make it out to be

Some of these prompts are really hard, I guess I might have to go with The Selection. I’m not a big fan but it’s not soooo bad I guess.

WINIFRED SANDERSON’S SPELL BOOK: A book with a mind of its own

I’m gonna go with Throne of Glass due to all its twists and turns.

GARRY MARSHALL: A book with a cameo

The only books I can think of with cameos are The Mortal Instruments. Magnus Bane anthology and The Infernal Devices so I guess I’ll have to go with them.

What would your answers to these prompts be? Do you agree with any of my choices? Or do you disagree? Let me know in the comments!

It Only Happens In the Movies Release Party 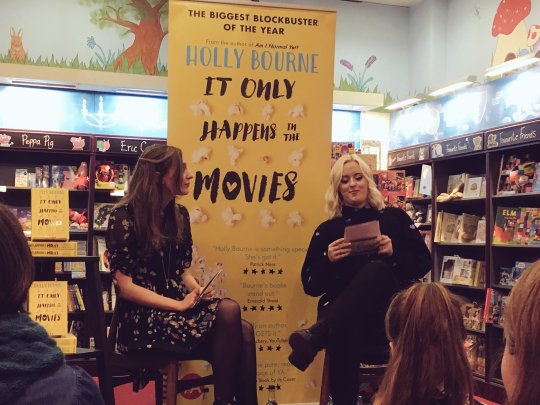 Photo credit to Steph @ A Little but a Lot

I’ve just arrived home from a great night at Holly Bourne’s It Only Happens In the Movies release party at Waterstones in Newcastle and thought I’d blog about it straight away before I forget a detail!

I found out about this event only two days beforehand, by some stroke of luck on Twitter and immediately booked a ticket! I had yet to read or even own It Only Happens In the Movies but I absolutely adored Holly Bourne’s Spinster series so I have no doubt this book will just as great!

I arrived a few minutes early, slunk into a row near the back and awkwardly scrolled through Twitter for a while waiting for the event to start. A few minutes before it was due to commence, I decided to buy my copy of the book – an absolute steal at only £2.99 because of the discount that came with the event ticket and grab myself a glass of cranberry juice (Waterstones really know how to treat a girl!)

Shortly after I made it back into my seat, the event started with a Q & A where Katie Thistleton asked Holly all sorts of questions about movies, her latest novel and her writing in general. After that Holly was quizzed on her YA knowledge and luckily she didn’t let her Ravenclaw self down, though the scores were never totted up. Then it was on to a friendly game of Kiss, Marry, Kill between Katie and Holly. The four rounds were Kristoff from Frozen, Christian from Moulin Rouge and Magic Mike, Eric from the Little Mermaid, Gale from THG and Jack Sparrow (which got a request to just kill them all from Holly), Newt Scamander, Becca from Pitch Perfect and Finn from GotG, and then Moana, Wolverine and Jack from Titanic.

Then it was time for the questions from the audience and let me tell you, there were some great questions which incited some fascinating answers from Holly! I was super excited to hear about her upcoming collaborative novel ‘Floored’ which she will be writing with 5 other great UKYA authors, all whilst keeping who wrote which character secret, which is super cool!

After all the questions, it was time to move on to the signing, where I got the chance to have my copy of It Only Happens in the Movies signed by Holly and got the chance to (in a somewhat fangirly fashion) tell her how much I loved The Spinster Club series. I then picked up my super cool goodie bag as I left (see photo below). In the goodie bag was a sampler of the Usborne YA books to be released in 2018, an ARC of Orphan Monster Spy, a set of Holly Bourne badges, a cute fan and a bag of cinnamon popcorn.

All in all, it was a great event! I loved hearing from Holly Bourne all about It Only Happens in the Movies and her other upcoming releases. The only thing I regret is not being brave enough to go up and chat to other bloggers, so that’s my goal for the next bookish event I attend!

So a huge thanks to Waterstones Newcastle, Holly Bourne and Katie Thistleton for an absolutely fab evening!

I haven’t blogged since February. That’s almost eight whole months. I’ve been busy, life has been hectic and I’ve thought more than once about giving blogging up. I even went so far as to delete the Twitter account attached to this account, but I’m not sure I can do it. I love blogging. Most days I didn’t feel very good at it all but I love connecting with other readers and sharing my love for books.

So I guess this is an apology, a promise and a new start all in one. First of all, I’m sorry for just completely abandoning this blog. I haven’t picked up a book in months and couldn’t find the motivation to blog, so one day I just stopped. It’s taken me a while to get back to it, but upon receiving an exciting parcel, I was reminded about the joy of reading and the thrill of sharing it with this community.

I’m promising not to pull the plug on the blog just yet. I can’t promise to post every week or even every fortnight but I am promising not to give up on it. I’m going to keep blogging and I’m going to get a new Twitter account. I love chatting with you guys, so please leave me a comment letting me know how you’re doing and what books you’re loving at the moment.

As for a new start, I guess this is it. I haven’t posted in months but over the next few weeks, I’m hoping to get stuck back into reading and writing for you guys and should have some exciting new content soon!

My Twitter is back again at @opinionful so send a message or a follow my way and we can reconnect!