Before I start I want to remind you about my survey. I would really love it if you could take a few minutes to quickly fill it in, it would mean so much to me. You can find it here. Please, please, please fill it in. Thanks in advance.

Sight: This week I went to go and see Mockingjay with some of my friends and OMG! I am so grateful for Jennifer Lawrence, I cannot picture anyone else being such an amazing Katniss. I also would love to thank Francis Lawrence, the movie stuck to the book so well. I had tears in my eyes throughout the entire movie and even cried at some points. The actors and actresses all portrayed their characters so perfectly, and could feel the hurt, anger and confusion radiating of Katniss. It broke my heart to see hijacked Peeta and it was only for a few minutes, I genuinely don’t know how I am going to cope with part 2. Has anyone else seen it? What did you guys think?

This week I also read Split Second By Sophie McKenzie and enjoyed watching Scorpion. My brother’s favourite character is Sylvester, but I just love them all. Although I do particularly ship Walter and Paige, in this week’s UK episode (True Colours) the Walter and Paige moment was just so cute. I can see they are starting to fall for each other. Does anyone else watch Scorpion?

Taste: This week, I organised a cake sale at my school and one of my friends made the most amazing type of brownie ever. It was white chocolate and raspberry with milk chocolate chunks. I think I fell in love! I love trying new types of cake, especially since I am not the best baker. What’s your favourite type of cake?

Touch: This week I wore my Christmas jumper for the first time this year! Yay! You know what that means, it’s almost Christmas. It was a cream jumper with a sparkly red nosed reindeer on it and I wore it at a Christmas Ceilidh at my church with a red cord skirt and reindeer antlers. 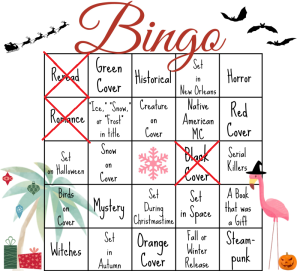 So I’m not really doing that great, but I have read three books for the holiday bingo. They are Split Second By Sophie McKenzie (Black cover), Crown of Midnight By Sarah J. Maas (Reread) and One Night with the Prince (Romance). After looking at my rather limited progress, I have now resolved to do better. I plan to read A Discovery of Witches By Deborah Harkness (Witches), The Book Thief By Markus Zusak(Historical) and Heir of Fire By Sarah J. Maas.

I don’t mean to sound like a stuck record, but I’d like to remind you about my survey. A few people have answered it and I am extremely grateful to them, but I would love as many people as possible to join in. I want to know what you think, so in the new year I can changes that you want and welcome. You can find my survey here.

Top Ten Tuesday is a weekly meme host by The Broke and the Bookish. This weeks theme isn’t particularly relevant to me, as I never really have a specific TBR list in mind, I usually read whatever takes my fancy from my shelves, so I have just picked ten books from my shelf that I have yet to read.

1. A Discovery of Witches By Deborah Harkness

5. The Book Thief By Markus Zusak

6. We were liars By E. Lockhart

9. I capture the castle By Dodie Smith

As you can probably tell, a lot of these books are the same ones from my autumn TBR list that I just never got around to reading.

I just wanted to remind you about my survey, which I made so I can find out a bit more about you guys think about my blog. It would be great if you could fill it in, it will only take a few minutes. You can find it here. Thanks.

I have decided to start a new feature on my blog called Sunday senses, it will be a way of me letting you knowing what’s going on in my life.

This week I have enjoyed watching Arrow, The Flash, Marvel Agents of Shield, Scorpion and Atlantis (These are the TV programmes I watch religiously). Last week I also watched the final episode of The Last Ship, there were so many feelings! It was so dramatic, yet happy, yet sad and I just can’t wait for the next series! I am in love with Barry from The Flash, I mean he’s just so adorkable. And I think Scorpion is totally badass, anyone else watch Scorpion and know what I’m talking about? (You better not be judging me on my fangirling about TV programmes.) 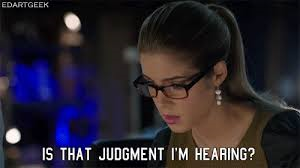 Bookwise I read Angelbound this week which was good and I will be posting a review for soon. Finally I also saw the new Pitch Perfect 2 Trailer and I’m so excited!

This week I have enjoyed listening to Taylor Swift’s new album 1989, especially Blank Space.  Although I must admit the music video for Blank space is really weird, I mean, hello psycho Taylor! I have also been loving The Script’s Superheroes.

This week I have enjoyed Haribo Smurfs which are super delicious and I have also fallen in love with Muller corner bliss, the yummy yogurts. As you can probably tell, I have a bit of a sweet tooth.

For touch, I am going to talk about clothes I have worn or admired and wanted to buy over the past week. This week I wore my Olaf t-shirt for the first time and it’s so cute (see the picture below). I’m also pleased because it has now become boots weather, so it is acceptable for me to wear and show off my brown knee high heeled boots.

I don’t really know what to write for this one, so if you have any ideas let me know!

And finally I have created a survey, so I can find out a bit more about you guys think about my blog. It would be great if you could fill it in, it will only take a few minutes. You can find it here. Thanks.

I was tagged to do this by the writing hufflepuff so thanks to her!

Girl in the pages

Top Ten Characters You Wish Would Get Their Own Book

Top Ten Tuesday is a weekly meme host by The Broke and the Bookish. This week I have decided not to include Harry Potter characters as I know I could easily fill all ten spaces. I mean, Draco Malfoy, Hermione Granger, Neville Longbottom, Luna Lovegood, Fred and George Weasley, the Mauraders, Teddy Lupin, Severus Snape, Albus Dumbledore and Minerva McGonagall. That’s ten right there! Anyway, moving away from Harry Potter. My Top Ten for this week are:

1. Isaac from TFIOS.
I mean, I love Isaac. That pre-funeral speech man! Do I need to explain further?

2. Nehemia from Throne of Glass
I think Nehemia is really cool and ninja like, but in a very different way to Celaena, which is what would make it so interesting to read more about her.

3. Finnick from Catching Fire
Who doesn’t love Finnick? If any of you put your hands up then I’m afraid we can no longer be friends. I would love to read about his victory, time in the Capitol and his romance with Annie.

4. Ari and Janco from Poison Study
It would great to find out more about their adventure pre-Yelaena, as they must have had plenty, being soldiers. I would also love to know what they were doing whilst she was away.

6. Meredith from Anna and the French Kiss
I thought all the characters in this book are great and I would love to find our more about each of them, but I would especially like to see Meredith find her own happily ever after.

7. Caleb from the Divergent series
We only ever really see Caleb as a traitor through Tris’ eyes, however I want to know he felt the same way she did when he finally found somewhere he thought he belonged. How did he cope in Erudite?

8. Simon from the Mortal Instruments
I absolutely love Simon! He is a geek, vampire, best friend, and boyfriend. He just makes me laugh so much. I know Cassie Flare is releasing some short stories about him, but I would really like s proper novel.

9. Charlotte from the Infernal Devices
She seems like such a strong female character in world dominated by men. Most of the time, I just think she needs a round of applause. *claps for Charlotte* Well done, you should be very proud Charlotte.

10. Toby from Severed Heads and Broken Hearts
I just read this books and will be posting the review for it soon. I really enjoyed it (except for the ending) but I would really love to read more about him.

This is really late, I’m so sorry, but I’ve just been so busy with school and NaNoWriMo. I really didn’t get very much read in October, however I did do a lot of planning for NaNoWriMo.  NaNoWriMo is fun, but a lot of hard work. At the moment I’m a little behind, but I hope to catch up this evening. Hopefully in November I won’t just be writing a lot, but also reading a lot. I want to do a bit better in order to complete my goal of reading 64 books this year. Currently my goodreads meter is telling me I am seven books behind.

So the books I read in October were:

Wolf of Stone By Quinn Loftis

The Infinite Sea By Rick Yancey

One Night with the Prince By T.M. Mendes

And the posts I made were:

Anna and the French Kiss Review

Top Ten Places Books made me want to visit

Top Ten Book Characters I want to be for Halloween

alwaysopinionatedgirl
Create a free website or blog at WordPress.com.